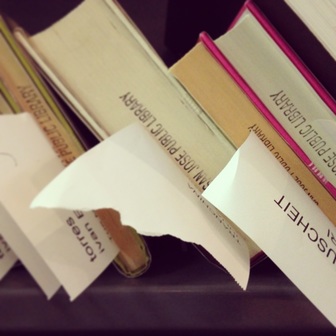 The place in San José that I love the most is a cheap metal shelf, gray and squat and rectangular, in the browsing room of the first floor of the downtown MLK library. I put a quarter in the meter, which gives me seven minutes – nothing’s cheap here, even library parking – and dash up the granite stairs to the glass doors of the front entrance, glide past the bustling student coffee shop and cheery security guards, and make a beeline for my shelf. If I’m lucky, and I’ve planned well, two or three books raise a paper flag for me, my name printed in block capital letters. I request them hungrily at odd hours of the morning online, novels and surfing memoirs and young adult candy fiction and feminist Swedish thrillers that my favorite writer blurbed, and they appear like magic on the shelf, waiting for me snugly in the “T” section. I keep the flags sometimes, slip them in the back of the book so they don’t fly out accidentally and interrupt my reading, but I find them in corners of my house later, tucked into the space between the back of the couch and the cushion or in the pile of mail on the kitchen table.

I can’t request everything I want to read. Some books are too new, or too obscure, or too bougie (I have an account at the Los Gatos library, a pain to visit but good for books about time management and eating disorders), but most of the time, I’ll at least get on a request list, joining a legion of never-seen compatriots who also spend their nights curled up alone in their heads, in free dream worlds offered by faraway writers, instead of at expensive downtown bars. I always wonder about the folks next to me on the shelf, how old they are, how often they come in, if they’re students or if any of the tech workers in the condos across the street actually like reading.

If I have two or three quarters for the meter instead of one, I can stop at the Lucky Day shelf before checkout. If my tastes are trendy enough, I’ll find a requested book early among the most popular releases, take it out for just the week I’m allotted, stay up late to power through a few hundred pages before it’s time to drop it in the silver return slot. Some books have square stickers affixed to them – “your tax dollars at work” – and I am thrilled that my taxes go to this place, with its view of the East Foothills from the seventh-floor elevator, rising green past the silver city, spiked with palm trees.

The librarians can answer questions, and I suppose they’re the ones who fetch the request shelf books, but they aren’t paid anymore to check out the books for me, so I carry them to the solo station and run the barcodes under the scanner myself, waiting for the ting that signals that they’re mine now, at least for a few weeks. I would prefer to thank someone for my books, would prefer the San José State marching band to follow me out the doors, saluting the librarians and the writers who I can read for free, girls tossing batons in the air and tuba players puffing their cheeks in gratitude. Even if I don’t find a Lucky Day book, I feel a surge on my way out, my purse jutting out at odd angles from my bulky rectangular prizes. I want to tell the security guards what I’ve won, share with them how thrilling it is to read Kaitlyn Greenidge or Sarah Schulman for free, just a few weeks after their novels were released, pages still crisp, but I know they won’t care. In the middle of this gleaming hall of books, they’re always on their phones.